Tarkine, Changing the Nature of the Shoe Industry with Innovation

We revisit last year’s winner of the Best Innovation Award from a Start-up, Tarkine.

The 2020 winner of BridgePoint Group’s Best Innovation from a Start-up, Tarkine took the gong with their industry-defining stance on producing recyclable running shoes.

Running every step of the way

Following on from winning the award last year, Sam and the team have been continuing to develop a new class of sneakers. With eighteen prototypes tested, tweaked and refined, with design input from podiatrists and performance insights from professional runners, the Tarkine Goshawk is production-ready. The Goshawk is a high mileage trainer that looks good enough to turn-up for lunch at a stylish cafe and make it through an afternoon session on the trails.

Other sneakers can make the same claims but…

Yes, other sneakers can make the same claims but the one claim they cannot make is that they are manufactured to be 100% recycled. Thereby lies their uniquely sustainable status.

Tarkine enables this in the manufacturing of the shoes. They use both 100% recycled plastic and a decomposable inner-sole. It’s the customer custodianship which is the key innovation in their plan. Customers use a Tarkine’s post-use recycling program, in which customers return their used shoes (which Tarkine then recycles) and customers receive a discount on their new pair. 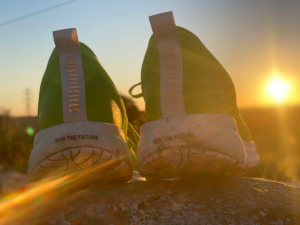 It goes to show that an idea, as simple as recycling, can be applied to any vertical market and an innovative led idea, can make something special happen.

Tarkine has undertaken a clever Kickstarter campaign to ramp up production and make these sustainable sneakers available from March 2022. The Kickstarter campaign enables any pledge amount or you can pledge to get one, two, three or four pairs of the earliest produced sneakers. It also offers a 20% discount off retail pricing as well a number of rewards depending on the pledge commitment made.

How has Bridgepoint Group helped along the way?

BridgePoint Group has assisted Tarkine by processing claims for the Research and Development Tax Incentive. The tax incentive has reduced the financial burden Tarkine has carried for research and development of this innovative product. If your company needs help regarding the government’s innovation grants, please contact Alan Baghdasarayan on 0418 957 003 or email alan@bridgepointgroup.com.au.